Olga Zinovieva is a soprano of Russian origin, who has been living in the Netherlands for over fifteen years and has made a career in this country. She has developed into a singer of great repute who has impressive mastery of a wide repertoire. With her beautiful enchanting voice and her elegant style and scintillating personality she touches a large audience. In various reviews she is praised: ‘A pure voice, very dynamic and with an extensive range’ and ‘Her technical skills linked to a quite natural presentation account for her great attraction. 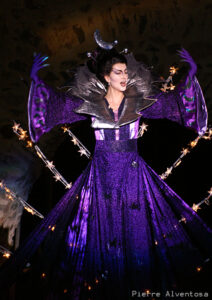 Her development as a solo singer was boosted after her remarkable contribution as the Night Queen in Mozart’s Zauberflöte in 2008 at the Opera Mosset Festival in the French Pyrenees in 2008. She was greatly helped by the cooperation with her mentor, renowned baroque specialist Pieter Jan Leusink. Olga made her solo debut in nationwide tours, including five concerts in The Concertgebouw in Amsterdam with Bach’s ‘St Matthew’s Passion’ and Mozart’s ‘Requiem’ and ‘Krönungsmesse’. In 2011 she also made her debut on Dutch television as solo soprano in the Dutch spoken performance of Bach’s ‘St Matthew’s Passion’ which was also covered by CD and DVD.

Since her close cooperation with conductor Pieter Jan Leusink Olga Zinovieva has developed into the leading lady of his baroque ensemble The Bach Choir of the Netherlands. Her performances amount to over a hundred a year and besides she participates in various CD recordings. Among Olga Zinovieva’s repertoire are a lot of great oratorios. Be it her impressive version of ‘Aus Liebe’ from St Matthew’s Passion by Bach, her pious ‘Pie Jesu’ from Fauré’s Requiem or the serene interpretation of ‘If god be for us’ from Händel’s Messiah, Olga gives lustre and significance to every aria.

In February 2014 Olga contributed to a live CD and DVD recording of Mozart’s Krönungsmesse and Requiem in The Concertgebouw in Amsterdam. In both oratorios Olga performs the soprano part of the soloists’ quartet.

In September 2014 Olga Zinovieva embarked on a unique Mozart project, the chance of a lifetime. In a five year cycle she has performed and recorded sixteen concert arias in cooperation with the Bach Orchestra of the Netherlands, again conducted by Pieter Jan Leusink. Mozart’s concert arias make great demands on a soprano, both in the way of singing technique and with regard to range of voice. Very special is the aria ‘Vorrei, spiegarvi, oh Dio’, which requires a range of voice more then two octaves. The high ‘E’ is the highlight of this tender masterpiece. The world-famous aria ‘Der Hölle Rache’ from the opera ‘Die Zauberflöte’ Olga performs with a great deal of verve. In her own words: “ The great demands made by Mozart’s concert arias are quite a challenge to me. They are of great use to my development as a soprano and go splendidly with my voice. I am very happy to be in a position to perform this splendid repertoire.” February 2015 witnessed the world première of the Dutch film ‘Erbarme Dich’ by director Ramón Gieling. In this remarkable movie which shows various artists explaining what St Matthew’s Passion means to them, Olga plays a role as the singer she is. In a very pure and penetrating way she performs the arias ‘Blute nur’and ‘Aus Liebe’. The movie was first run at the Dutch Film festival in Rotterdam and was watched by over 25.000 people at art cinemas. By now ’Erbarme dich’ has made a tour past European art cinemas and will shortly be presented for the first time in Switzerland and appear on Dutch television.

In the years 2010-2013 Olga Zinovieva was given the opportunity to excel as a soloist as a member of Vocal Group Call, directed by Pieter Jan Leusink. Her charisma was shown to the full in her encounters with over 40.000 listeners. Vocal Group Call has made various CD- and DVD-recordings, which all contain the special contributions of Olga. The very special rendering of Rachmaninoff’s ‘Vocalise’which was recorded while Olga was standing in Lake of Bolsena and the devout rendering of Gomez’s ‘Ave Maria’ met with great applause. Her splendid performance of Caccini’s ‘Ave Maria’ in the special Ice Hotel in the Finnish town of Kemi, is an other outstanding contribution.

Olga Zinovieva started her musical career at the age of eight studying in the school of music in her native city Novosibirsk (Siberia, Russia). Her remarkable talent stood out when she was still very young which resulted in her selection for Gnesins´ Russian Academy of Music in Moscow. In 2004 she completed her studies with great honours, for which she was highly indebted to her excellent teacher of singing, professor Margarita Miglow, herself once a soloist in the famous Bolshoi Theatre. As an opera singer Olga Zinovieva first appeared in Moscow and St Petersburg in Rossini´s Il Barbiere di Seviglia (Rosina) and Verdi´s La Traviata (Violetta). 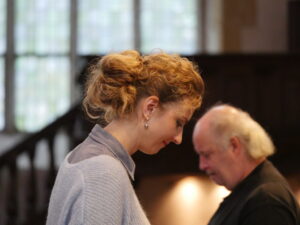 In 2005 Olga Zinovieva decided to further develop her career in Western Europe and began her Master studies at The Royal Conservatoire in the Hague, with Barbara Pearson and Diane Forlando. After her successful participation in the singer competition at French Toulouse, she appeared at the “Grachtenfestival” in Amsterdam, the festival Classique in The Hague and in the Rotterdam Days of Opera. Olga Zinovieva has developed to be one of the greatest sopranos performing in The Netherlands.

Check the Calendar for upcoming concerts.

Would you like to hear Olga live on the concert?

Sign up for the newsletter and receive a unique discount code. Then you will be able to reserve a ticket for only € 25.00. Furthermore, you will receive the information about upcoming concerts.