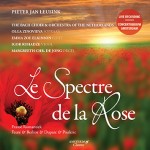 This CD is a live recording of the concert that took place in May 2014 at the Royal Concertgebouw, Amsterdam. The musicians and conductor Pieter Jan Leusink pay homage to French composers from Romantic era. The Bach Choir of the Netherlands performes a cappella works by French masters Poulenc and Severac. Irish flute-player Emma Zoe Elkinson plays ‘Sicilienne’ by Fauré and his spectacular ‘Fantaisie’ for flute and orchestra.

Soprano Olga Zinovieva sings the famous ‘Chanson triste’ by Duparc and two songs from the cycle ‘Les nuits d’été’ by Berlioz: ‘Villanelle’ and ‘Le Spectre de la Rose’. The song ‘Le Spectre de la Rose’ gives Olga the opportunity to show her talent widespread. The song is very demanding for the performer and it is breathtaking. The CD was released in July 2014. Click here to order.