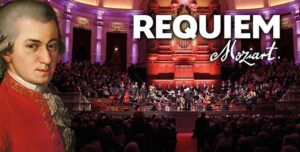 In February 2021, Olga Zinovieva takes part in the Mozart tour with The Bach Choir & Orchestra of the Netherlands through the Netherlands. She will be singing solo parts in Mozart’s Requiem and the Coronation Mass.

In addition, Olga will be performing a sublime aria ‘Geme la tortorella’. During this part of Mozart’s opera “La Finta Giardiniera” you will hear the theme of longing and loneliness.

Mozart’s Requiem became known to the lage public through the film ‘Amadeus’ and it is perhaps the most impressive work by this composer, who died young. Mozart wrote the Requiem just before his own death, by the order of an anonymous client.

The festive Krönungsmesse shows a completely different Mozart. At the coronation of the King of Bohemia, the Archbishop determined that mass should not last longer than 25 minutes. Despite, or perhaps because of this limitation, the Mass exudes vitality and energy. Check the Calendar here.

This site uses Akismet to reduce spam. Learn how your comment data is processed.